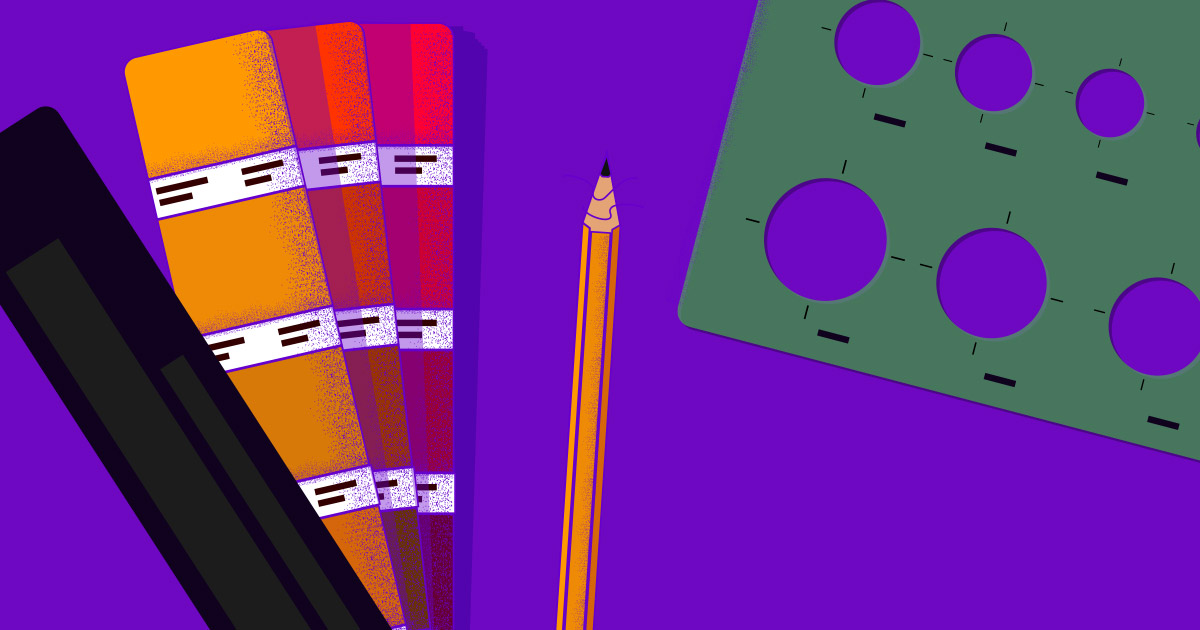 This is the second year of the Steel City Ruby Conference (SCRC) since its inception last year. We were lucky to be the designers of the shirts for the conference last year, so we were super excited to get the opportunity to do it again this year.

We knew we wanted something that reflected both the great city of Pittsburgh, Ruby, and ultimately how cool the Steel City Ruby Conf is. We worked with the SCRC organizers who supplied us with some resources to investigate the unique and positive landmarks and attributes of Pittsburgh.

Some of the inspiration and goals were: 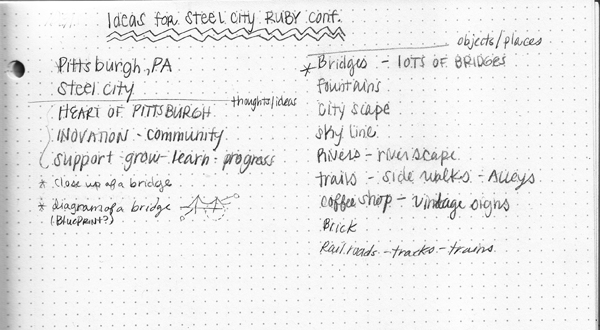 Focus on things that speak to the new Pittsburgh, rivers, bridges, the skyline, iconic locations and traditions. Some initial candidates:

Style elements that the organizers wanted to convey with the shirt design were Gritty, Modern and Iconic.

The conference also got a new look this year that featured a bright yellow color scheme and yellow bridge mark, with a bold tall sans serif type. Even though the organizers did not specifically request it, I wanted to ensure branding was consistent. It’s the way I was taught. Design is never an isolated thing, especially when it comes to event design. It is important to stay consistent with the established brand image because successfully branded events motivate the audience towards the desired goal of the event. Consistent branding gave us an established direction for the conference t-shirt design.

The process of starting on paper is truly an important one. It allows you to get all your ideas out quickly, without obsessing over the details that you can be overcome by on the computer. Also, it gets you away from the computer and all of its influence so you can think creatively without the Internet for a crutch. I began the sketching process with a few ideas I had in my head and wanted to see where I could go from there. Some of my initial thoughts were of something with bold type that had a fun message and few graphics. I also researched a few areas to see what kinds of designs worked well on t-shirts. Ultimately, I sought advice from my co-workers who are part of the target ruby developer audience attending this conference, and who have attended many other conferences. They suggested the opposite of what my thoughts were, because although they appreciate that a conference wants to announce itself, they find themselves re-wearing the conference shirts with the lesser amounts of type. For them it’s easier to wear or choose to wear a shirt that simply has a great graphic message as opposed to an in your face typographic message that people are forced to read ever time they see it. Given this feedback, I refocused my ideas and began to sketch. 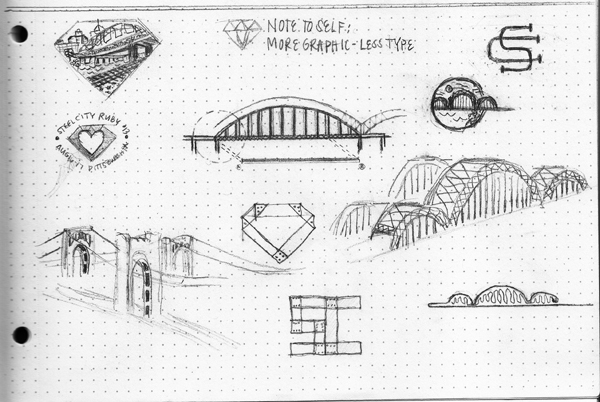 I really wanted to focus on the bridge inspiration because it feels so iconic to Pittsburgh, and SCRC chose it as their mark this year. I talked myself into the idea that it would be really interesting to create an exploded view diagram, blue print, or specs of a bridge design because I felt it would speak to all the style elements and the cohesion of the conference branding. This idea also speaks to the ingenuity of the “Pittsburgh way,” with references to its industrial roots and the engineering that goes into building such complex, yet useable structures.

It seemed clear that the challenge revolved around properly laying out the structural outlines of a Pittsburgh bridge on a shirt; however, the results were an abundance of yellow lines and a less then compelling tee-shirt design. So what do you do when you are faced with the challenge of a really interesting concept and no way of executing it? You ask your team what they think, and this is the point where it all started to come together. The team heard my ideas, reviewed my work and sketches, and gave me feedback that supported my concept. The ruby shaped – yellow bridge – steel beamed – exploded view diagram came to life. The final design embodied what the organizers were looking for but went beyond what they expected. By meshing the themes, of new Pittsburgh, modern, gritty, and iconic, the design functioned as something that would generate a cohesive brand image as well by featuring the same typeface and color palette as the established SCRC 2013 branding. 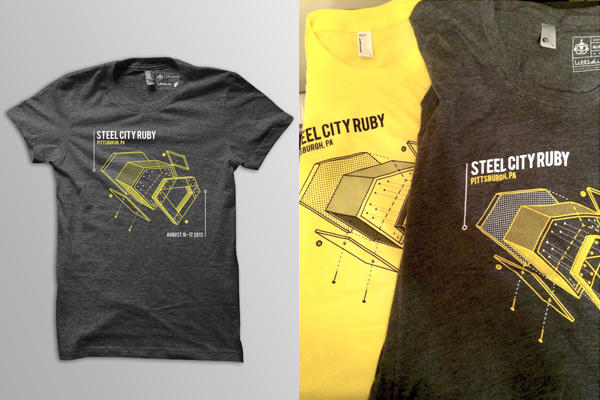 justinxreese  I’m so happy @littlelines is doing the @SteelCityRuby shirts again this year. Just got blown away by the design by @bethcmo.

We want to thank SCRC and the organizers for allowing us to work with them. We have had so much fun creating the t-shirt and collaborating for the Ruby community. We can’t wait for the conference. It was great last year and we are excited to see what they have in store for us this time around.